I’m writing this sat in the bus from Milano Centrale to Linate Airport. Our Italian adventure ends in the same place where it started 9 days ago and I am more in love with Italy and stuffed with carbs than ever. We visited Milano, Torino, Sanremo, Rapallo, Portofino, Cinque Terre (Vernazza and Monterosso al Mare) and Florence. Already getting nostalgic about the Italian way of life, today I’m thinking of our first couple of days in Milan and Turin.

And I am writing this from the seat of an Overground service taking me to work as I’m a procrastinator. This time Italy was disappointing for me, but nothing too dramatic. Considering I had only visited Rome (albeit twice) up to this point, I was expecting the same history-cluttered country as I’ve seen so far yet I found Milan and Turin to be quite modern cities. No Trevi fountains hidden between residential buildings, no inconspicuous Trajan’s columns nor tree-hidden Roman forums. Florence had a bit of that – so I’m cool with it.

We landed at Linate as it looked like the better choice (closer to Milan and better flights from Gatwick). For some reason we were convinced we had to take a train to Milano Centrale; we duly asked a member of staff “how to get to the train” only for them to explain to us how to get to Milano Centrale, where all the trains are. The minibus journey takes about 25 minutes and costs 5 euros but I’m pretty sure you can take a bendy bus for 1.5 euros all the way to Duomo di Milano (bus 73).

Since we landed a couple of hours before our friends and too early to check in we went to the Pasticceria Rovida to start our trip properly with some coffee and pastries. I ordered a rich flavoured ‘espresso’ and brioche and later found out that I had made a fool of myself.  It’s frowned upon to say espresso, instead ask for un cafe (per favore). If you want to pose as a connoisseur ask for a marocchino(similar to a cappuccino but with cocoa powder on top). Only ask for cappuccino (or any milk coffee) before lunchtime to avoid suspicious looks. I noticed that coffee with ginseng is also on offer. I found this to be an useful article on how to order coffee in Italy.

After that we met up with our friends, checked in and decided to go for a walk around Milano. Too excited to stay in or maybe forgetful of how hot  summer midday gets, we set out on foot towards the centre.

Worth mentioning at this point that we were staying somewhere near the Centrale train station and as per our host we can just walk to the Dome. The way they described it was “take a left, then a right, keep walking straight ahead and you’re there”. Naively, we followed suit. It wasn’t until after about 20 minutes that we checked Google Maps and realised we have another 30 mins or so of walking. In ~35°C.

We snacked on pizza slices at Verace and cooled off with gelato from Viel and lusted over all the Italian goodies.

We stopped in the shade wherever we found a park and quenched our thirst at the many fountains around Milan.

After a lot of window-shopping around Quadrilatero d’Oro admiring elegant palazzo pants (whatever these are), colourful silk scarfs and wide sleeved blouses and of course all the great Italian bags and shoes, we eventually made our way and saw the magnificent Milan Cathedral – which was definitely worth the long walk.

Let’s not forget about the stunning Galleria Vittorio Emanuele II (also a good spot for some more window-shopping).

Tired from the walk and hot sun, we got the metro on the way back and picked up some salad and fruits from a supermarket. There’s loads of interesting and healthy options to make up for all the gelato you eat during the day, such as fresh salads with different cheeses and nuts, ready-made soups like the Italian staple minestrone or quinoa and kale and an impressive spread of cheeses, cured meats, fresh veg and fruit. Of course, shopping at proper Italian markets would be much preferred and cheaper if you have the time. We called it a night pretty early as we were tired from the trip and planned on setting off early morning towards our next destination, Turin.

We booked a car from Avis Budget through a 3rd party as it was the cheapest option. We went to the rental office which was the size of a closet and after waiting patiently for our turn I presented my papers and excited to drive around the beautiful Italian roads for the first time. However, my excitement was short-lived as a slightly grumpy office worker told me I need to present him a UK document. Not a specific document, just *any* document. I was baffled and explained to him that I am living and working in the UK as an EU national and that I don’t need therefore I don’t have any UK papers but he was having none of that. We then called the 3rd party rental company who tried to reason with the employee but to no avail; eventually they managed to amend my booking to Europcarwhere everything went smoothly.

After the not-so-fun adventure we had been through to retrieve the car, we thought a scenic drive from sunny Milan to the Alpy Turin was just what we needed; thus, we decided against driving on the motorway and taking the A roads. Not the smartest decision since the route was as interesting as your grandmother’s latest soap opera episode. At least we didn’t pay the motorway toll…

Turin, just like most Italian cities, is very tricky to navigate by car as it has a ZTL (Zone a traffico limitato)where if you are not a resident or have a special permit you’re not allowed to enter the city centre by car. Mind you, you can very well drive into it, but you will receive a nasty fine which will make you remember that in the future. We navigated our way using Google Maps which has a brilliant little option to ‘avoid toll roads’; and that seems to do the trick in most of the Italian cities.

I was extremely excited to see Turin. I was expecting majestic mountains surrounding it but to my disappointment I didn’t see any (that might be down to her not wearing her glasses). 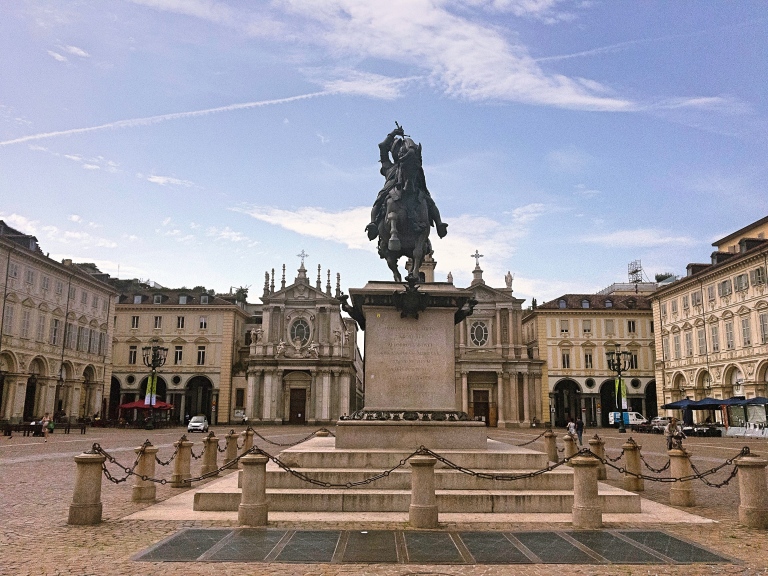 In all fairness, you could see some mountains quite far in the background, but they were not as visible as any Turin pictures lead you to believe. 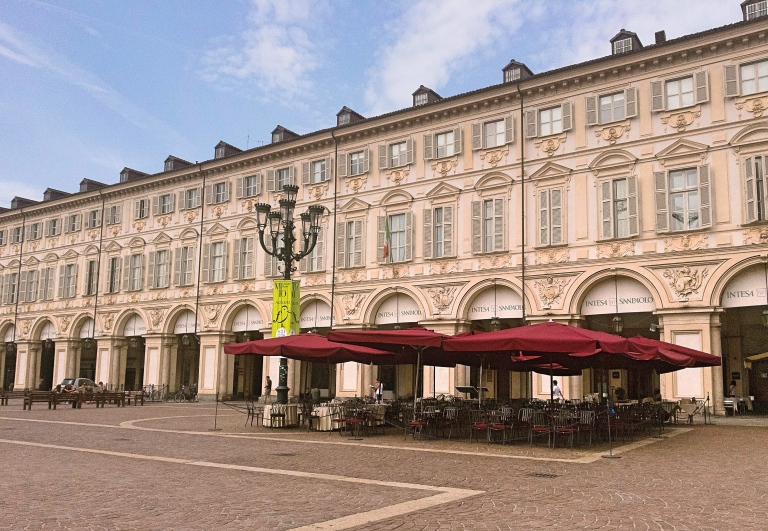 Top tip: If you plan on taking the bus then make sure you buy the tickets you need from a “tabaccheria” before they close; don’t assume (like we did) that you can buy them from a ticket machine or the bus driver.

The next morning we wandered around sleepy little streets, walked past charming cafes.. 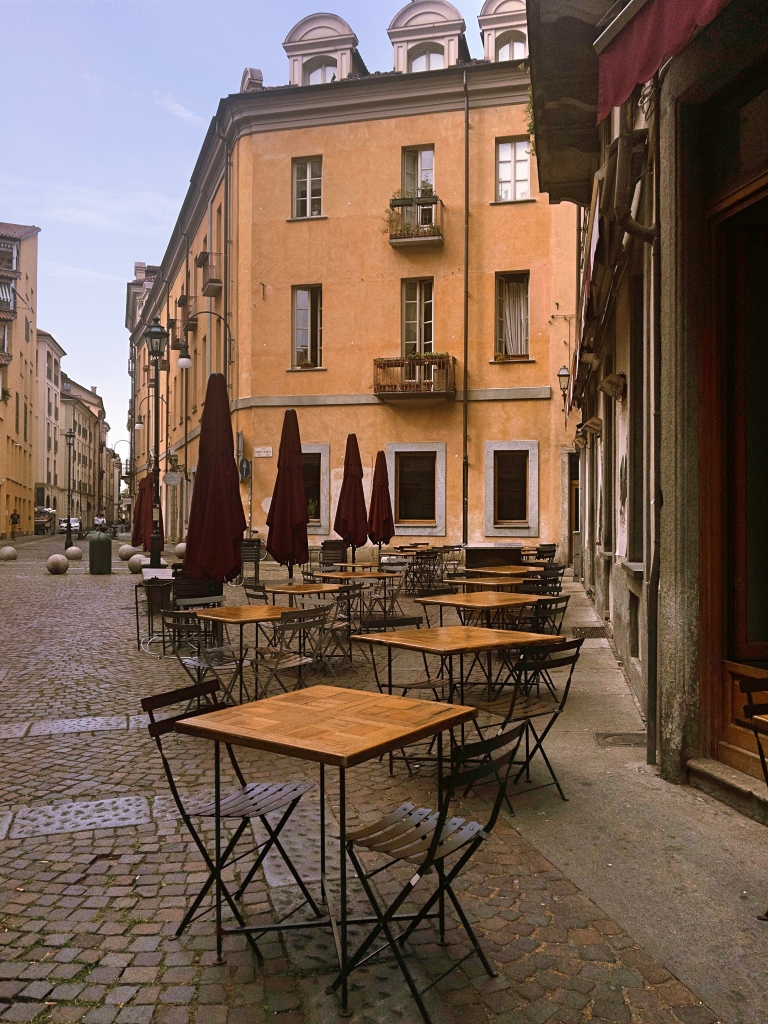 …until we reached our destination, the well-known Al Bicerin Cafe for the traditional chocolate coffee (bicerin) and some delicious biscotti. 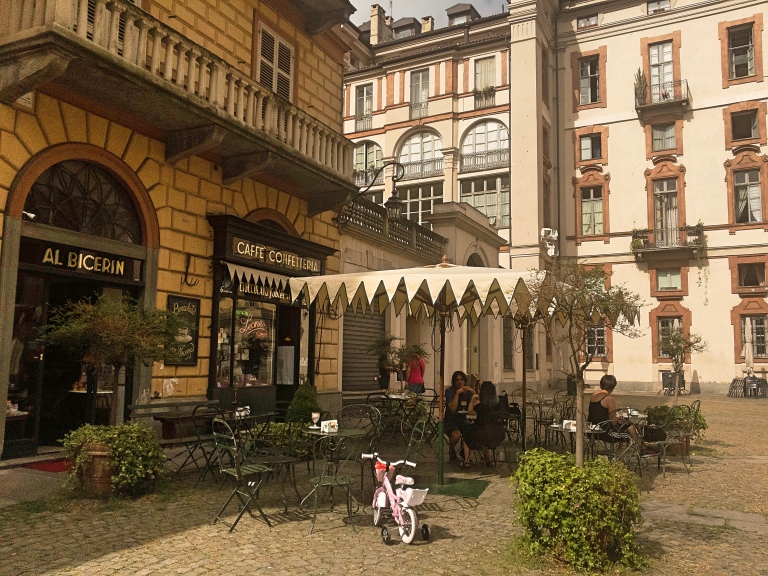 I don’t typically have so much sugar for breakfast so it’s safe to say I was on a rush until well into lunch time.

Two days is nowhere near enough time to explore these massive cities so we’ll need to come back and get to know them better but it was a great start to our trip and incredibly interesting to see how contrasting these two were.

I’d just like to say 2 days were enough for me. Would rather revisit Rome for a third time to be honest.

We left Turin on the morning of our third day and drove towards Sanremo for a few days of relaxation on the Ligurian sea. I can’t even begin to describe how excited I was for our next destinations but I’ll give it my best shot in the next article..

This site uses Akismet to reduce spam. Learn how your comment data is processed.